Nostalgia Canaglia (Damned Nostalgia – https://www.facebook.com/nostalgia.canaglia.7?fref=ts ) is the ultras group of Quartograd. The group main objective is to back the team while promoting ideals like anti-fascism, anti-racism and sportsmanship. We are convinced that fascism has to be fought always and anywhere: in the stadiums as in the streets.

We do not care which category our team plays, we love it and we are bound to the values of old football while we refuse modern football mentality that is based exclusively on economic power. For this reason we are against the betting system that is transforming the most beautiful sport in the world from a source of amusement to a pure source of economic income.

We do not share the sterile rivalry between cities, instead we promote dialogue and aggregation between different supporters to unite to fight against political repression. We are promoting a political campaign to ask for identification numbers on police uniforms, that in Italy is not mandatory. It is a struggle to prevent power abuse and State killing.

We have a ‘twinning’, a brotherhood, with the team Spartak Lecce and their supporters ‘Brigata Manicomio’, we are comrades, brothers and sisters in the field, in the stands and in the streets.

National meeting of the Calcio popolare in Italy, to discuss the future of the movement Against modern football, a slogan that express the passion of every every real football lover. ... END_OF_DOCUMENT_TOKEN_TO_BE_REPLACED 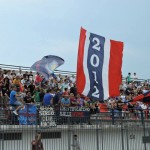 We said that the promotion was only postponed, and here it is, just sooner that expected. Quartograd had been chosen to go in Promozione, the upper category of Italian football, ... END_OF_DOCUMENT_TOKEN_TO_BE_REPLACED

Quartograd, The promotion is only postponed

A bitter en of the season. We fought as lions until the last minute, but Quartograd lost the final match of the play off and so missed the promotion in ... END_OF_DOCUMENT_TOKEN_TO_BE_REPLACED