AS Livorno Calcio, throughout the years has had a number of various Groups of Supporters following it. In 1999, the “Brigate Autonome Livornesi” (BAL99) was formed in an effort to unite all these Supporters Groups into a single one, for better organization and the centralization of the Ultras. After trying out a few names, the new central Group adopted “Brigate Autonome Livornesi” as it’s official name and a 90 meters banner with the Group’s name marked the North Stand at the Armando Picchi stadium. The “BAL99” was welcomed by all Livornesi, with it’s strong Communist and Antifascist politics. Livorno, being the birth place of the Italian Communist Party, found in the “BAL99” the perfect Supporters Group for AS Livorno Calcio.

With these characteristics, the “BAL99” became a symbol of Left wing Ultras, and one of the strongest and most famous Ultras Group in Italy. Soon after, a strong friendship began. The “Triangle of Brotherhood”, with the fans of Livorno, AEK Athens and Olympique Marseilles, namely between the “Brigate Autonome Livornes”, “Original 21” and “Commando Ultras 84”.

On the other hand rivalries were born. Rivals of Livorno Ultras are generally all right-wing and extreme right-wing Ultras, such as of Lazio and Hellas Verona. Big rivals –but not for political/ideological reasons- are the “neighbors” of Pisa. Between the two towns exists a hatred at all levels, both inside and outside of the pitch.

Throughout it’s existence, the Group has been struck over the years by numerous measures. In a single football season the Group lost up to 500 members, after they were given the “Daspo”and a ban from all stadiums Year 2003 marked the dissolution of the “Brigate Autonome Livornesi”.

In the recent years, Livorno’s Ultras got organised again, under the name “Curva Nord”. Big flags, banners and impressive coreos bring life again to the Curva.

The new Group, simply named “Curva Nord” fills up the North stand of the stadium at each game, supporting the team. Their presence, helped the young team of Livorno to go from the tragedy of Piermario Morosini’s death in the pitch during the Pescara – Livorno game, to the triumph of the last season’s promotion to Serie A.

Curva Nord demands one thing for this season.. To remain in Serie A and to celebrate the next season’s 100 years old anniversary of Livorno Calcio, at Serie A! 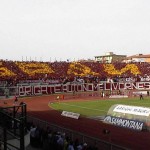 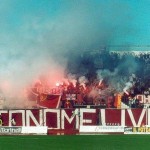 Livorno is awaiting for the Sunday’s match against Frosinone. One more match, another effort to get the so much needed three points, on the struggle for achieving once again promotion ... END_OF_DOCUMENT_TOKEN_TO_BE_REPLACED

Livorno Calcio and the city of Livorno is in mourning. Yesterday afternoon, the 14 yeared old son of Livorno’s former coach Davide Nicola, lost his life after he was hit ... END_OF_DOCUMENT_TOKEN_TO_BE_REPLACED

Our last home game and the defeat by Fiorentina, was our last game at the Serie A. It was a difficult season for us, we tried and gave ... END_OF_DOCUMENT_TOKEN_TO_BE_REPLACED