We’re at the end of the 91/92 season. A group of seven lads who has been following Rayo for a while make the decision of organizing an antifascist supporting focus for the next season at Estadio de Vallecas. The summer comes to the end, and the new season begins. In the middle of the end (the only end of the stadium, actually) a new non-political group is born with the name of “Brigadas Franjirrojas”, formed by a hundred members. Next to them will be placed Bukaneros, named after the traditional “Batalla Naval” celebrated every year by the people of Vallekas.

The peaceful coexistence does not last too long. Some members of the Vallekas’ section of Ultras Sur takes control of Brigadas Franjirrojas, so the seven lads of Bukaneros decide to move to other stand to show their support, together with the unforgettable fan group called “Los Petas”.

The concept is clear: “Rayo, Working Class and Anti-Fascism”. But the group does not grow up in the first two years. Just one fanzine, barely a few away trips (standing out the one to Cádiz, where the friendship with Brigadas Amarillas was born) rise the group to just about fifteen members.

At the 95/96 season, some members of the new Madrid section of Brigadas Amarillas get into the group, which grows in only one year from 15 to about 40 members. Feeling stronger, the problems and fights with Brigadas Franjirrojas begin, and two years later, Bukaneros will take the trash out of the stadium. The trips to away games become more and more common, always in the company of “Los Petas”. This development brings an evolution in the activities of the group: new banners, flags, fanzine (a new one at every home-match) and drums. And this algo brings the first fight with rival mobs. The name of Bukaneros begins to be known outside of Vallekas.

Next season, with the team in Second Division is the year of the return: Bukaneros is back at the end of the stadium. Feeling at home the group becomes bigger and stronger. During the next two year the group creates new and better merchandise, and the away trips become something usual. It’s also usual the visit of rival mobs, but Vallekas is not an easy ride anymore. Rayo and Bukaneros become too big for this división, and promotion arrives at the end of the season…Vallekas is on the top again. Time to prove our worth!

This new situation brings more members to the group, that rises above 200 people, bringing new strengths and will: the group takes usual part in political issues of the neighborhood, and the “Day Against Racism” becomes adopted in the stadium.

So, in this atmosphere, arrives the most important moment of  the history of the team and the group: Rayo plays UEFA in the 2000/2001 season. Bukaneros will visit three cities: Andorra, Vitoria and the most important one, Bordeaux where the contact with local ultras will be a revolution inside the group.

Next season become a new born for Bukaneros,with  more and more flags, supporting material and songs.  This season is also the one of the arrival of the first tifos to the end made by Bukaneros, from the easiest ones, developing to bigger complexity. But not everything is a happy song for the group. The trips are not numerous, standing out the one to Bernabeu (R. Madrid), where the security stole the banners, giving it to the local ultras.

But the team goes back to second division, bringing the farewell of part of the new arrival fans from the stadium. The few stays, keeping about 200 members in Bukaneros. But the ones who stay, prove to be the ones who really have the will. Many trips, moving a big part of the group and showing our banner at every corner of the country. This year could be considered as the one of the generational change, introducing definitely the spirit received at the Bordeux trip.

But a good moment for the group does not mean a good moment for the club. Another fall; this one to 2B (third level of Spanish football). But is in this kind of moment when someone must prove their strength, and Bukaneros certainly does. For the first time, the group get over 300 members. This new energies make possible to support the team in every stadium in the península, plus Mallorca and Las Palmas. There’s even Tifos as visitors, like the ones in Alcalá or Alcorcón. But not even with this support the club is able to come back to second division.

During the four years of the 2B nightmare, Bukaneros will learn the value of unity, effort and will, develop within the group in every aspect we could imagine: away trips, Tifos, magazine, merchandise, Street, etc..In this time, the 100 hardcore people become a family, defending the name of Bukaneros and Rayo all over the country.

And back in second division, it was the turn for Bukaneros to prove if we learned those values said before. Two years to face all the adversity we found and everyone who wanted to bring us down. Two years that brought even more love and respect for our people, but also brought the bitter taste of repression. A bitterness that we still tasting.

But problems has been an incessant partner of the journey, so we overcame, just as the team did, and two years later, we were back in the first division. Plenty of new challenges to face. First of all, the new owners of the club, who we have been struggling with from almost the very beginning, continuing with the struggle against the former owners, where Bukaneros had an outstanding role.The outside is full of rival mobs and rival teams, but when you have the enemy at home, you can’t just think in any other stuff, and we do have it. Our enemy nowadays is called Martin Presa (the owner); is called repression; is called modern Football and is called passivity from a big part of Rayo fans. We don’t doubt when we have to face them, and if in the path we must defend the name of our group, our team or our district in front of any other, be sure we will…no matter who, no matter where. 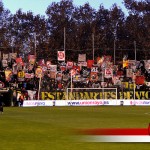 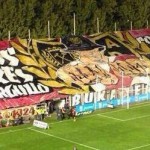 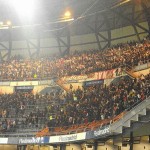 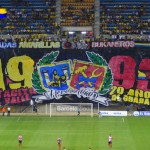 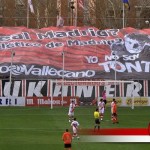 Back in Action & Freedom to Alfon!

After a hardworking summer, we started this season full of energy and willing. We keep working hard in every way of the group, like our choreos, which are ever present during ... END_OF_DOCUMENT_TOKEN_TO_BE_REPLACED

This is being a really busy summer for Bukaneros’ lads. Season was just ended when we got into a plane in our way to Hamburg for the Antira Sankt Pauli’14. ... END_OF_DOCUMENT_TOKEN_TO_BE_REPLACED

What a season for Rayo!

Next to the end of the season, and after a great couple of months, the salvation was close, so we thought it would be unacceptable not to be next to ... END_OF_DOCUMENT_TOKEN_TO_BE_REPLACED