Between 1942 and 1945 around 120.000 people of Japanese ancestry were relocated to internment camps by the US government. More than half of them were American citizens, also known as nisei which means ‘second generation’ (US-born children of Japanese immigrants). They were interned because the authorities questioned their ‘loyality’ during the war and were afraid that the Japanese government would use them as spies. Although Japanese Americans are now considered a so called model minority, there are still lessons to be learned, especially by the current Trump administration. Because just like the nisei then, many other ethnic and religious groups are being targeted for not being ‘American enough’. 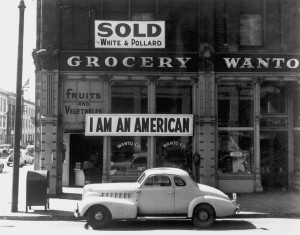 The political climate in the US has taken a turn for the worse since Trump came to power. The border wall plan, a travel ban, apologism for violence by white supremacists and increased racism and xenophobia. Republicans and their mostly white conservative voters use the excuse of ‘preserving American identity and values’ in their witchhunt against anyone and everything they consider ‘un-American’. The Japanese Americans who were mostly hard working business owners were suddenly degraded to second-rate citizens, or even as traitors.

In February 1942, nighttime curfews were created in 12 zones across the West Coast, where a large part of the Japanese American population lived. Any person who would break these curfews would be immediately arrested. White Americans put up signs in their neighborhoods that said “Japs, keep moving, this is a white neighborhood”. But this is only where it started. On 19 February 1942, president Roosevelt signed Executive Order 9066, which gave the US military the authority to remove and relocate any person they wanted from their house. Although Japanese weren’t specifically mentioned, they were the main victims.

In March all had to register their entire families at control stations, where they were given a date and a location to report themselves for deportation. The time in between could range from two weeks to just four days. They had to gather all belongings they could carry and were forced to sell their houses and businesses within that time. Some white Americans took advantage of this and they were able to buy the property for ridiculously low prices.

There were a total of 10 camps on different locations in California, Arizona, Wyoming, Colorado, Utah and Arkansas. Although the Japanese Americans tried to make their life in the camps as little terrible as possible, the conditions for them were tough. They lived in wooden barracks, heated only by coal-burning stoves, and hot water was limited. Many of them spent years in the camps in an atmosphere of tension, suspiscion and despair, surrounded by barbed wire fences and armed guards. 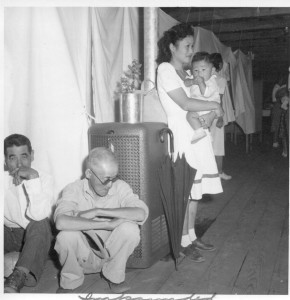 By 1944 the government began investigating and concluded that many nisei were in fact ‘loyal’ citizens and they were allowed to leave the camp for jobs in other parts of the country. Some enlisted in the US Army and fought in Europe in the 442nd Infantry Regiment, which mostly consisted of Japanese Americans and became the most decorated unit in American military history. Nonetheless, the Supreme Court deemed the internment as justified in a court case.

After the war, many families who returned home found their former houses vandalized with graffiti slogans like ‘Japs not wanted’. Until a few decades after the war, Japanese Americans were looked at with prejudice and distrust. Linkin Park member Mike Shinoda, whose fathers family was interned, speaks about this in the song Kenji from his group Fort Minor:

“Then they got back to the home
And what they saw made him feel so alone
These people had trashed every room
Smashed in the windows and bashed in the doors
Written on the walls and the floor
“Japs not welcome, anymore!”

“I don’t want any of them (people of Japanese ancestry) here. They are a dangerous element. There is no way to determine their loyalty… It makes no difference whether he is an American citizen, he is still a Japanese. American citizenship does not necessarily determine loyalty… But we must worry about the Japanese all the time until they are wiped off the map”

So basically, it doesn’t matter if someone is an immigrant or an American citizen, if he/she is of a certain ethnic group, he is suspiscious . And this brings us to the present day. Last year, there was another Executive Order 13769. President Trump signed the order to ban people from certain Muslim-majority countries and refugees from entering the US, which was later slightly revised by the Supreme Court. A few years before during his presidential campaign, he stated that ‘rapists’ and ‘murderers’ from Latin American countries were crossing the US border from Mexico illegally.

Many Republicans and their mostly white followers are quick to believe anti-immigration rhetorics, for reasons that have nothing to do with legality or illegality, but with what they call ‘preservation of American culture’. But the only people they should ask about American values are the Native Americans. More and more video’s on social media go viral of people getting harassed for speaking Spanish or Arabic or for wearing headscarves, to name examples. During the entire period of internment of Japanese Americans, not a single case of spying was ever proven. Just like there is no link between immigrants and crime. There are many confusing reports about illegal immigrants committing the majority of crimes in the US, while in reality most cases in federal courts are for violating immigration laws. Thus in reality, it’s white supremacism, and America doesn’t seem to learn from it’s history….

Previous Step into the roots of popular football Next Omonoia 1948: They didn’t begin, they’re continuing!