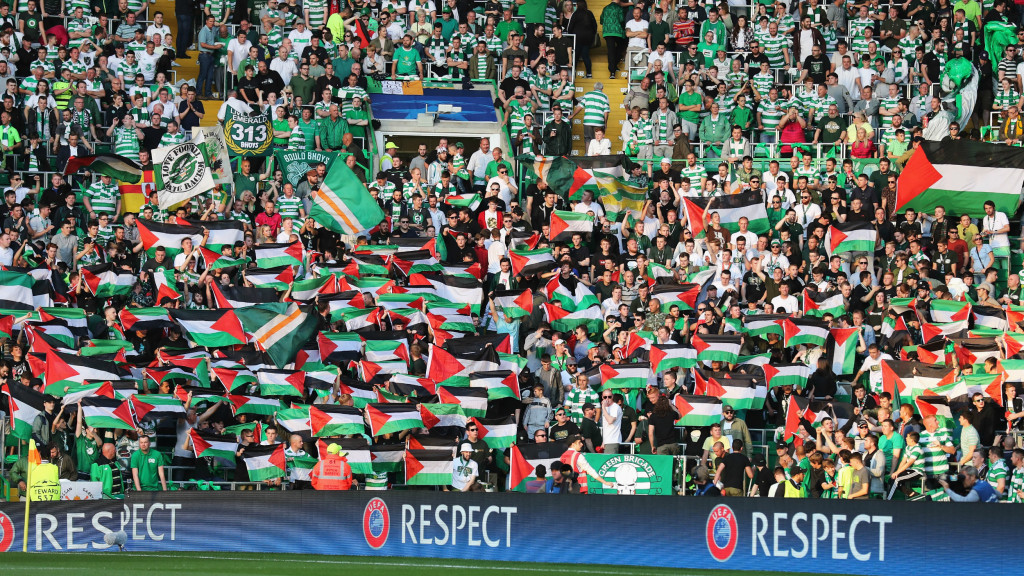 Glasgow Celtic fans have launched a fundraiser to match any fine that Europe’s ruling football body, UEFA, will give the Scottish club for an expression of Palestine solidarity at a recent game against the Israeli team Hapoel Beer Sheva.
UEFA has announced that it has opened disciplinary proceedings against Celtic for display of an “illicit banner.” The “illicit banner” is a reference to Palestinian flags waved by Celtic supporters last week.
The fundraising campaign has been set up by the Green Brigade, a Celtic fan group, which has pledged to put part of the money towards setting up and sustaining a youth soccer team in the occupied West Bank.
Another part of the proceeds will go to the charity Medical Aid for Palestinians, MAP.
The Green Brigade “ultras” were largely behind a solidarity action at a Champions League against Hapoel Beer Sheva match in Celtic Park, the Glasgow club’s home ground, last week. Celtic won the game by five goals to two.
Supporting Palestine
The money raised by the Green Brigade will not actually go towards paying any fine imposed by UEFA. Rather, it will be used to support projects in Palestine.
Green Brigade has described UEFA’s disciplinary proceedings as “petty and politically partisan.”
It set the objective of raising £15,000 (about $20,000) to form and sustain a football team, Aida Celtic, based in Bethlehem’s Aida refugee camp.
The target of £15,000 is based on a previous fine UEFA handed out to the club after another display of Palestine solidarity in 2014.
By Monday, the Green Brigade had already raised more than three times the initial £15,000 target, according to the fundraising page.
Celtic fans have previously raised funds for Aida camp. A youth delegation from the camp toured Scotland earlier this summer.
The only football pitch in the camp was built by the Lajee Cultural Center in Aida. Its coordinator, Salah Ajarma, has welcomed the initiative and pledged to call the team Aida Celtic in recognition of the show of support from Celtic fans.
“It will mean so much to our young people to be part of an official team, to have boots and strips and to represent the camp wearing the colors of our friends,” Ajarma was quoted as saying by the Green Brigade group. “Aida Celtic will be a source of pride for all in Aida.”
The funds raised will provide equipment, team uniforms and cover travel costs to allow the camp to enter a team in the Bethlehem Youth League. It will also pay for an annual Aida Celtic football tournament of teams from refugee camps across the West Bank.
Sense of history
UEFA bans the display of symbols deemed political at football games.
Celtic has strong connections to the Irish community in Glasgow. The repeated displays of solidarity reflect the affinity between Irish people and Palestinians as both have experienced colonization and occupation.
“There is a strong sense of history among that community, even though it’s now third, fourth and fifth generation Irish,” Scottish historian Tom Devine told Al Jazeera. “The situation in Palestine is a classic example of land that is being taken from people who lived there for generations. It chimes in with the course of Irish history.”
In a statement following last week’s game, the Green Brigade explained that its action sought to challenge the normalization of the Israeli occupation of Palestine.
“From our work with grassroots Palestinian groups in the West Bank and the refugee camps of Bethlehem, we know the positive impact international solidarity has on those living in the open prisons of the occupied territories,” the Green Brigade stated.
“We also know that their suffering cannot be ignored by the international community and last night’s actions also sought to raise awareness of the boycott, divest, sanctions (BDS) campaign which seeks to challenge the normalization of the Israeli occupation.”
Since the action last week the story has gone viral on social media with Palestinians using the hashtag #thankscelticfans to show their appreciation for the display.
In Ramallah, the crest of the club was projected onto a building over the weekend.
Celtic will play the return tie in Israel on Tuesday.