Love football, hate racism! Football fans from several countries met for the 13th time under the famous slogan at Strahov June 4th. In protest against racism they fought for LFHR Cup in soccer.
Organizers from Barflies Prague hosted not only Czech teams but also friends from Slovakia or Belarus. A total of 25 teams participated in the tournament in a super atmosphere. The third place was taken by BFAM, the „silver medal„ went to Black Krab from Belarus. The winner of the Cup was a team called Gybot, for second time. The event was traditionally accompanied by vegan refreshments, stand with souvenirs and evening party at club 007- excellent concert of the shining stars of Prague-based punk scene by Karabina and Punto D’Onore. The ones who attended the concert surely confirm, it was a great success.

Why do we organize the tournament?

It would seem that the problem of racism is no longer a hot issue. But it is. Unfortunately. The Czech republic has begun turning alarmingly brown recently and the nationalists win support they have not even dreamed of. “The wave of refugees threatens Czech culture!” “Our daughters will walk in burkas!” “Christianity is in danger!” Such drivels can be recently heard on almost every corner. Not only from neo-Nazis, but also from politicians on television, or so-called decent Czechs in the pub, on the streets or at the stadiums. Virtual hordes plundering our ethnically unified Czech country are universal bogeymen and any anti-immigrant hoax return in hundreds of sharing on Facebook, email or Twitter. It’s 2016, but despite the fact that the anti-fascist movements hope for the end of the nonsense about decent white and black evil, it’s still here. To organize an antiracist tournament is therefore still a good idea. Perhaps now more than ever.

We say it again: No to Racism!

The beliefs of Barflies Prague as well as friendly people around the world stay the same. We are totally against the division of people based on race, against populist brainwashing by ultra-right political swines and nazi rioting. We are for solidarity among people and we still think that NO HUMAN IS ILLEGAL.

You can support us at the next LFHR tournament in autumn. And because it’s not just all about political views fortunately, you can just play football next time or have a beer or burger. We look forward to seeing you. 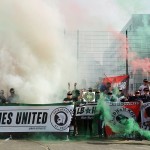 2016-06-15
RebelUltras
Share !
Previous: Previous Post
Next: New Season Announcement- Join the Popular Club!
Powered by Unity & Solidarity | Designed by Creative Rebels
© Copyright 2016, All Rights Reserved
Do NOT follow this link or you will be banned from the site!