Last time you read about us summer was ending… and season starting! Some months have passed since then and a lot of things have happened. First of all, about our team. We are in 8th position after 6 wins and 2 draws. We are having problems in away matches but at home we are one of the best teams of the league.

We are also glad with the players and the new trainer. They are committed to our colours and to our group. In fact they have visited our fanclub. Last time was at end of October when we invited them to a lunch after the match they won 2-1. A great day where fans and players shared food and drinks in a good atmosphere. The same day, at the match, we showed a tifo with smoke bombs and two banners. First with a motto against a journalist that spoke ill of our region. The motto was written in our regional dialect and said something like “Salvador Sostres (name of the journalist) we speak in this way”. The other was supporting our 2nd trainer (good friend of our group) who has suffered his mother’s death.

But this is not the only important thing we have done it this season. We have been in two away matches. First at Fuente de Cantos where we show a tifo with little flags, and second at Zafra where we spent a great day of brotherhood with Frente Azul. At home we have showed another tifo with the motto “Faithful to this feeling” and made a collection of plastic bottle caps which we used to recycle and raise money to pay a treatment of a young boy who has a severe disease.

You can also see a photo of a pyroshow at the exit of our town where we “say goodbye” to our team at 06:00AM when they start a long trip for an away match. The banner said “Defend it” speaking about our club’s shield. 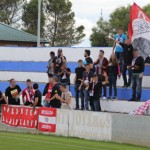 2015-11-11
RebelUltras
Share !
Previous: The Black Gloves that Shocked the World.
Next: Poilitical Split over Refugees in Czech Republic