Quartograd, The promotion is only postponed

A bitter en of the season. We fought as lions until the last minute, but Quartograd lost the final match of the play off and so missed the promotion in Promozione. the final for was a difficult draw, but not impossible.

On sunday 7th June we won the Group play off final against Citta di Carsoria by 2-0. A wonderful performance from all the squad, but especially from our striker Giosi Capuano who scored two fantastic goals.

On the terraces of our stadium, as always during big games, hundreds of people attended in support of Quarto, but also comrades joined from other parts of Napoli, and beyond; We had some ultras from Spartak Lidense, another team of popular football from Ostia (close to Rome) also joined us on the terraces. The joy in the city was great!

For the final match we had to face Sangiovannese away. The problem was that theis stadium was not up to standards, so they closed it to the public. We asked to play on a neutral pitch so as to allow supporters to attend this important game, but they refused.

On sunday 21st we played in a closed and silent stadium, but we didn’t give up and so we went with our players and supported them, singing and lighting pyros in the streets around the stadium.

Unfortunately we lost, but all the same, we still had a party with our players, who we thank for giving it their best.

Our promotion is only postponed, there is no defeat in the heart of those who fight. 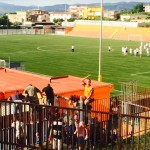 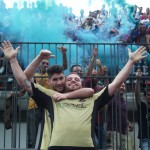 2015-06-25
RebelUltras
Share !
Previous: In this time of darkness
Next: Football, Cinema and ROCK!