Waking up from a dream

Montreal Impact made it to the CONCACAF Champions League finals.

It took 48 hours to sell 45 000 tickets, something unheard of in North America. With a packed stadium of 61 004 supporters, including thousands of Club America supporters, it was clear that we would be part of a historic evening. Historic it was. But we lost. The visiting team was simply too strong for our level. Of course, everyone was disappointed to watch the Club America players cheering their continental championship on our own turf but no heart were broken that night.

We were not witnessing a defeat even if our team lost 4-2. It was just the end of an amazing run in the world of international football.

With 3 goals in 20 minutes, Club America showed us how much more depth their team had. The game was nonetheless historic. We started with a supporters march, had a stadium wide choreo and obviously chanted for the whole 90 minutes.

It was the last game of an amazing year of international competition, starting with a 2014 Canadian championship, then meeting and eliminating teams from the USA (NY Red Bulls), El Salvador (Club Deportivo FAS), Mexico (CF Pachuca) and Costa Rica (LD Alajuelense). No one thought that was possible. Still we did it.

Instead of crying about our last defeat against Club America we are in fact lucky. Lucky because the strongest and most dramatic moment of this competition was Montreal’s Cameron Porter goal at the 93’ minutes against Pachuca. This has really been the highlight of this CONCACAF competition. And we were there to live it. 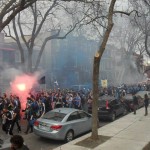