“The student, man, the thinker, the companion, the symbol”. This marked Che Guevara who came to life this day in 1928 (some sources say rather erroneously that was born June 14). A man, who inspires to date with his revolutionary spirit, young people everywhere, encouraged by the words he always did turn into action,  “to turn everyday life into a fire.”

Ernesto “Che” Guevara, known as Che, is one of the greatest personalities of the 20th century. The American Time magazine has listed him in the top figureheads of the century and we all know that he is viewed as a symbol of revolution and sacrifice. Born in Rosario town of Argentina on May 14th 1928, the active and athletic “Ernestito” or “Fouser”, from a young age already was doing very well in various sports, from football to swimming and cycling.

His academic knowledge at the age of twelve years old, accounted for that of an eighteen year old, as he tried to educate himself from Pablo Neruda to Lorca and from Aristotle to Nietzsche and Marx. Regarding the exact date of his birth, as several sources indicate June 14th as a possible date that hecame into the world, it is worth mentioning the source considered more valid is  his biographer, John Lee Anderson. Che Guevara’s birth certificate showing the date of birth on June 24, 1928.

A third party source however states that his mother confessed that actually gave birth to her son on May 14 and that the birth date on the certificate is forged to make it appear that her son was born a month later. Otherwise he would prove that she was already pregnant before marriage, so forged the date to avoid a scandal. The fact that the great revolutionary was suffering from asthma from an early age was perhaps the reason that he decided to deal with medicine when asked to choose the direction of study.

Passing through the first years of his life to radicalization and guerrilla warfare, “consolidated” him to a life of revolution, Congo, Bolivia and finally the assassination, the events that marked him and the people who influenced are pretty much known to all of us. The Argentine doctor participated in the movement that overthrew the dictatorial regime of Foulehensio Batista in Cuba and was a member of the revolutionary Cuban government promoting radical reforms. In 1965 he left to organize the new revolutionary movements of the Congo and later in Bolivia.

The injury, arrest and murder was the aftermath of his selfless spirit. Che Guevara murdered by Bolivian soldiers on October 9, 1967. The day of the execution, after the autopsy, the body of Che moved to a laundry room of the village where he was exposed as proof of the Bolivian army to the skeptical international press. The Bolivian authorities to prove that he was no longer alive, ordered the amputation of his upper limbs, which were sent to Buenos Aires for scientific confirmation of the identity of the deceased.

The rebel’s burial was in a field, in an operation organised by the Bolivian authorities and kept under complete secrecy. According to the BBC, when the agent Felix Rodriguez, announced to Che Guevara that he would be killed, Che asked him to convey to his wife his last words before his assassination. “Tell her to re-marry and live happy.” Che though, also took care to write letters to his children at any place he was. In one of the cards he had prepared for his daughter, he wrote:

“My dear Aleidita, I was observing the young gazelles running in the Savannah and I remembered you. Only here there are lions, and in our country young Gazzelles can run without anyone chasing them.. Do not forget to go to school and give a kiss to your new brother on my behalf. A kiss from his dad. ”

Fidel Castro once said about Che:

Here are some of the phrases we have to remember from the man whose dreams were always timeless and knew no borders.

“The best way to say something is to do it”

“If you tremble with indignation at every injustice, then you are my comrade”

“It is worth my friend, existing for a dream and even if that dream’s fire burns you”

“At the risk of seeming ridiculous, let me say that the true revolutionary is guided by great feelings of love. It is impossible to think of a genuine revolutionary not possessing such an ideal” 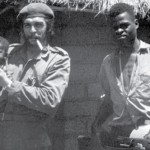 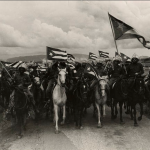 2015-05-15
RebelUltras
Share !
Previous: Bringing Down Barriers Through Football
Next: Waking up from a dream