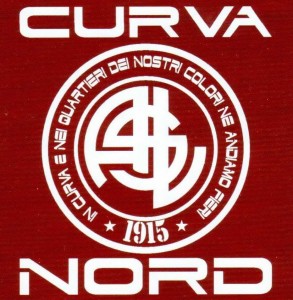 Livorno is awaiting for the Sunday’s match against Frosinone.
One more match, another effort to get the so much needed three points, on the struggle for achieving once again promotion to Serie A.

Especially on this season, where AS Livorno Calcio reached a whole 100 years old of existence.
The year of the Centenary, it’s when the Livornesi want to see their club again at the First Division.

There were a lot and important festivities about the Centenary.
Huge gatherings, long parties and as always visits from the Original21 brothers from AEK Athens and the Commando Ultras from Olympique Marseille.
There were of course, a lot of other Comrades from all over Europe coming here to show their honor for the Centenary.

“La festa per il Centenario”, the main organised festival for the Centenary included all the current players of the team, veterans and important figures in Livorno’s history and as reported above, also the Livornesi and all the brothers and comrades who came to join us.
There were also a boxing match of our own Champion Lenny Bottai, and an MMA match from another brother, Igor Nencioni.

There were also some excellent concerts.

One by our very own “57100 Punkrock Labronico”, and another important concert by Comrades of “Banda Bassotti”.

Previous "10 strategies of manipulation" by the media Next One Man Army: "The Pric€ of Football"