How it all came about… 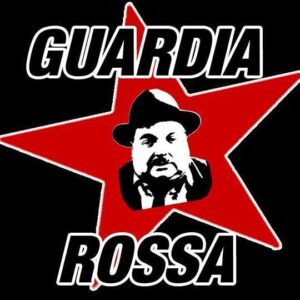 It must have been around one and a half years ago when a few politically interested footballcracks from Vienna who followed different First League Clubs decided to cancel their support for their former clubs because of their pro-capitalistic developments and to search for a club in the lower leagues that everybody of them could identify with. They searched for a club that has a long and still living on tradition as worker’s club, where entrance fees are still affordable, where you can build up a leftside terrace that is even wanted by the very club managers and players and where you can go for booze and party with the entire squad after the games.

We all know, that in modern football these yearnings are hard to be satisfied.

But then theses guys spotted „SC Red Star Penzing“. An eye-catching Clubname that appeared somewhere in the Fifth Austrian Division that forced the guys to do some research on this Club’s history. And the history was astonishing.

Founded in 1903 by some steelworkers living in Ottakring [ed.: 16th district of Vienna]  the club had many ups and downs in its long tradition as a worker’s club. First, the club with the english name – that always reflected the love to the football’s motherland as well as it underlined the internationalistic spirit of  the founders – was forced to rename itself by the Austrian emperor, when Britain joined the allies in WWI against the Central Powers including Austria-Hungary. This was instantly withdrawn after the war ended.

Then, with the uprising of the Austrofascists in the beginning of the 30ies, Red Star was expropriated by the fascists in charge cause of their tradition as a worker’s club and the whole VAFÖ (Freie Vereinigung der Amateur-Fußballvereine Österreichs; transl.: Free Union of the Amateur-Footballclubs of Austria) that Red Star joined from the very beginning as a protest against the foundation of the professional Austrian Football League ÖFB got forbidden. But Red Star kept playing – as a tenant on several grounds.

Under the Nazi-regime in Austria Red Star was forced to rename again cause an english name was not tolerated by the nationalsocialist dictatorship. Several players and officials had been departed to concentration camps but Red Star still resited the oppression and kept playing.
And again instantly after the war ended Red Star renamed itself like they were founded.

After several years without an own pitch Red Star finally found one in Fünfhaus [ed.: 15th district of Vienna] where they played until 1975. The still famous Karl-Volkert-Park (old stadium) then had to be  destroyed because a car park for the neighbouring shopping mall was errected. So Red Star moved to their actual pitch: The so called Auto-Platz next to the Kendlerstraße in Ottakring.

Regarding this history, everything was clear. It must be SC Red Star that the guys were searching for. And these guys are now the Guardia Rossa.

Free entrance at home for the members of the FC, bring-your-own-booze-policy, pyrotechnic that is accepted by the president, political statements that are tolerated and even appreciated by the management and the other participants and finally players, that party with the FC after the games – no matter if they loose, win or draw. That’s what every footballfan is longing for.

„After a few games we sat next to the Club’s legend zipping a beer or five with him and we were talking about our political ideology. He said: Of course the Club knows, that at some point you’ll get visit from right-wing bastards but guys, be sure on this: when these wankers come, the whole team will back our back! We are all antifascists!“ says Moe, so called ‚foreign minister’ of Guardia Rossa. „Right now we are about ten highly encouraged Guardisti with a pool of another 20 people that join the games from time to time. All together we are a good mix of workers, unemployed, students, migrants, men, women, elders and youngers – just humans that reflect the Austrian society. Regarding our offensive political declarations from the very beginning and that we just founded ourselves a few months ago, that’s quite good. We are just keepin’ on keepin’ on.“ 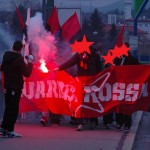