All is well and Antifa Action 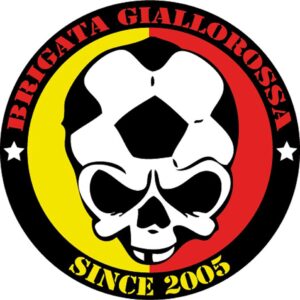 Our season-start was awesome and the second leg should be the same!

After 4 wins, we just got the second defeat of the season but we return to victory right the week after and remain at the second position of the league-table with a 4 point-gap to the leader.

On the terraces we continue to have some positives answers after the last 2 dissapointing seasons. Fortunately we got many new members which follow us on the away-games and support actively our Team, so we hope it will continue this way, till the end of the season, when we will celebrate 10 years of Brigata Giallorossa Merano.

Two weeks ago, some fascists (probably from Casapound Bolzano) made some night-action: they came to our town and stuck posters all over the city and also over our Graffity at our playground.

Within few days we organized and removed or over-attached the scum-propaganda. At our homematch 2 days later we also showed a banner against them and our friends of the Curva Sud Obermais did the same at their first match of the second leg. 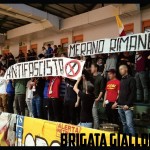