A lot has Happened this season!

The first game of our season was FC Ingolstadt 04 at home. Before the game we did a BBQ and a colourful march to the stadium. With the beginning we did a reversible choreo. It was connected with our song »…die ganze Kurve singt und tanzt für Dich. Unser Ein und Alles, ja wir lieben Dich!« (the whole stands sings and jumps for you. Our one and all, yes we love you). After 90 minutes the games ended with 1:1.

Our first away game was to South-Germany, to the VfR Aalen. Before the game we enjoyed the sun and the nice weather. We went to a lake and did some swimming. This was the only highlight because we lost the game 0:2. 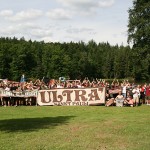 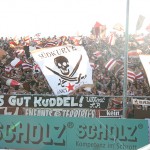 The weekend after we had to play the first round of the DFB cup. The very large Sankt Pauli supporters group did the travel with the train. FSV Optik Rathenow is a small club in East-Germany near Potsdam and Berlin. Their little cute old-school stadium is situated between little lakes and woods. We won with a 3:1 and celebrated a lot.

For the home game against SV Sandhausen we used thousands of stolen Germany flags for a black and red choreo. We used the a song of the famous radical left wing band Ton-Steine-Scherben »die rote Front und die schwarze Front sind wir!« (we are the red and the black front). We showed mangled riot police, a smashed and bruning police car, a burning prison and we used red smoke. We wanted to show that nationalism is racist. On the pitch it was soon and for a long time 1:1 but in the additional time we won 2:1. The goal was made by Lasse Sobiech. 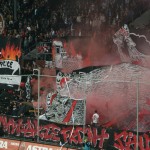 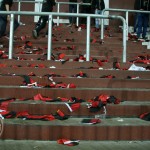 On a Monday evening we had to travel 600km to Spvgg Greuther Fürth. Sankt Pauli was weak and so we lost 0:3. But anyway the support was good until the end. Monday sucks!

The weekend before there has been the Squatting Days in Hamburg. It was an international congress of squatters. In addition to direct action workshops and discussions were held in which even parts of the Sankt Pauli supporters were involved. An activist is still detained by the police for an alleged attempted murder.

After a weekend without kick-offs TSV 1860 München has been the guest team at the Millerntor.

Already a few weeks earlier a young member of the Südkurve unfortunately left us forever because he could not find a way out of depression. The choreography was dedicated to this person to adequately say goodbye. Unfortunately the first game under our new coach Thomas Meggle could not be won and ended with a 1 : 2 in favor of the guests.

In balmy warm temperatures , our journey led to FC Erzgebirge Aue. At the entrance of the stadium we found that a memory of racist attacks was prohibited. Our Banner about the racist pogroms in 1991 in Hoyerswerda was discarded. Coinciding with the kickoff an ongoing rain started over the uncovered guest area. The team’s negative play continued even after the coaching change and we lost away with 3:0. What a fucking day. 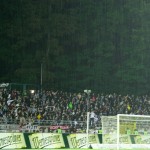 A few days later we received Eintracht Braunschweig in the English week. After an early goal and a lame game we were able to secure three points to us after a long time.

We showed some clear political messages for the partly clear right fan scene of Braunschweig (for the anti-fascist Ultras Braunschweig it is still not possible to return into their section in the stadium). We also used the game to keep the memory of Hoppe alive. We will never forget you.

After the home win in the back the next stop was FSV Frankfurt away. The game was an up and down of emotions. Before the break we led with 0:2 but suffered a goal just before the half time whistle. Shortly after the restart Frankfurt turned the game in a 2:3.

But just before the end we secured a point with another goal.  At least it was 3:3 draw.

On this sunny Sunday we sent our congratulations to our friends from Babelsberg. The Filmstadt Inferno 1999 was founded 15 years ago.

On the way back our buses were held nearly six hours by the police at the a service area on the motorway. The reason was a small altercation between a truck driver and a Sankt Pauli supporter. The result of these measures was that nobody could be identified by the witnesses. Still not loving truck drivers! 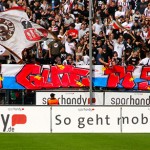 At the home game against Union Berlin we said good bye to OZ. He was a famous and celebrated sprayer, not only in Hamburg. He was aged 63 years as his passion became his death sentence. On a nightly foray he was fatally injured by a fast suburban train.

Until the end he has distributed his OZ tags, Smileys, spirals and also USP tags throughout Hamburg and made ​​the grey city more colourful. After a colorful choreography with many different elements that reminded OZ Sankt Pauli had a good start the guest had no change. But until the break the team just managed just one goal. But in the second half goals number two and three were shot.

Berlin just like us had a similarly poor start into the season and could not convince this day. Our team however showed a clear unity, strength and fighting spirit. After the game our team took a banner and also showed the respect for OZ. 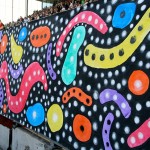 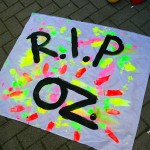 The refugees coming to Germany and Hamburg are an issue in the anti-fascist subculture for many months now.

The government and politics still not clearly tolerate them and don’t want to find a humane way to help the refugees. Immediately before the game against Union Berlin it was known that even in Hamburg Police and Security’s abused refugees.

Homepage of the refugees: http://www.lampedusa-in-hamburg.org/

Video of news concerning the Riot: