NK Zagreb has returned to the swamp that is Croatian Top League football. After a great season gently strolling through the pastures of the second division, first division football has returned to Kranjčević Street. Our first game was against the ‘European’ Rijeka, a club that has played in the Euroleague, with a budget several times higher than ours and at least two top players for each position. The autocrat who calls himself ‘our’ president – (our club is actually a one-man football club) – surprised us once more leaving Zagreb a laughing stock yet again. He has now officially appointed himself as coach, although this has been a scenario we’ve been faced with for the past few years.  Just like every other year to date,  he has succeeded in driving away several players of a quality far above his new anonymous first team players. So the result was more or less to be expected.

As for the angels, we have had a well-deserved break for two full months. We’re not in the habit of going to the pre-season friendlies, but for this first match we were back, strong in number with all our old habits, focused on the match. What it means to be a top division club in Croatia at present instantly became clear to us even before the game – “190” or our good old friends from the Zagreb Police Department (Special Division: for football matches only) took over the whole of the street in front of the stadium, the first time this has happened so far.  Fifteen police cars and a riot van were parked in front of the stadium, with constant patrols pushing along at 15 km an hour in the surrounding streets. Even we weren’t able to slip through their net –  they were waiting for us when we went for a beer in the park. They were there in various guises, undercover police in a new skoda cars, regular police officers and, of course, special division, made sure that there wasn’t one name they didn’t jot down in their notebook, before thanking us kindly with a simple ‘now walk’. We have been making regular appearances in the top division for years, always meeting in that particular park and the whole generations of Torcida, Kohorta and Armada fans have come to away matches at our stadium, but never have the police been present in such large numbers, so close to the stadium and in the stadium. The park was a mistake we won’t be repeating – given the beers we had drunk. We wouldn’t have been surprised if the less fortunate amongst fans hadn’t ended up with a night in a prison and the next day in court.

As for the supporting side of things, the match was expertly executed from where we were standing.  The cheering was constant, with a little Argentine style on occasion in its chaos, and flags and banners. We put up a banner in remembrance of Carlo Giuliani, an anarchist who was killed on 20.7.2001 by a cop with a bullet to the head, who practically overnight became a symbol of the global struggle against capitalism and capitalist lawlessness.

During the match something totally unexpected happened. The afore-mentioned autocrat Medić, the offspring of the town mayor Bandić’s Zagreb mafia sent us flowers with a generous bribe in the form of season tickets for the group. For those of you who don’t know, our dear Medić promised us flowers after he physically attacked one member of our group four years ago, because as he put it “we are women and you bring women flowers, you don’t fight with them.” Of course he wormed his way out of the attack as the gentleman in Croatian football that are free to do whatever they want, protected from the threat of the same law which looked after us so well during this game. Ever since that charade took place we have been singing a song we continue to sing to this day: “Medić you asshole, you didn’t bring us flowers.” From now on we’ll be singing “Medić you asshole, we didn’t accept your flowers.” Of course, he didn’t come up and give them to us personally as he had his hands tied playing sheriff on the bench, so he sent his technical director – popularly known as his muppet (in Croatian tuljan – sea calf) to carry out his dirty work for him. Once again, for those who don’t know, this muppet is the same person who, two seasons ago, used Medić’s account to pay some thugs to come and catch us and beat us up in the city centre, attempting to use force to silence us. That’s Croatian football for you, and we will spell it out once more for him as he has clearly forgotten.

White Angels Zagreb will only agree to the resignation of Medić and his managing team, allowing the people of Zagreb to become members of the club, so that NK Zagreb is civically run and owned  (the current nepotist state of affairs is technically illegal given that the club receives public funds). The members of this civic association, using direct democratic methods, would then write a competition for and decide upon the new management. So his flowers and tickets ended up on the pitch ;)

See you in one week’s time in Koprivnica … 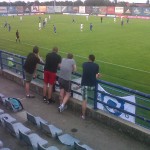 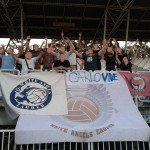