Season Kicks Off with Europa League!

Prior to kick off Derry fans met up in peaders bar as is tradition before any home European game, we had a drink and a sing song pre game before we set off for the Brandywell in good spirits. We arrived to a packed block k, undoubtedly our best attendance in what had been a very poor season for us on the stands.

Our display as seen in the photos and video was a simply one, but looked well regardless of its simplicity among the sea of red and white. The atmosphere was electric throughout and the game with all traditional Derry songs getting an airing, along with some old and some new, it was a mixture of our older generation of fans who were/are active In creating an atmosphere and the newer generation coming together for the first time and really getting behind the team, which is a major positive!

As always ANTIFA flags were on show, along with the ever present rainbow flag. Songs like ‘viva la Quinta brigada’ have now a permanent place in the city fans song book & it is very encouraging to see Derry fans young and old for the most part, taking a progressive attitude on the stands especially when the north of Ireland is going through a bad spell of racist/homophobic and islamiphobic attacks in recent months. All in all it was a great day for us and we are already planning for our next round fixture in the coming weeks! (avoiding disaster in Wales that is) 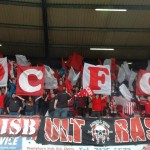 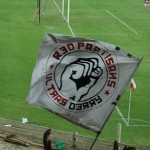 2014-07-08
RebelUltras
Share !
Previous: Season end and the Pride Parade !
Next: End of Season and Duchatelet