We are playing basketball final series against galatasaray right now, the score of the series is 3-3 and the last game is on Thursday in our court. Winner gets the title, and we hope we will be the ones to get it. but now the galatasaray coach and the club management say they will not be playing the last game, the title game for they are afraid of their lives. This coming from the ones who attack our woman players, board members, u17 players, killed a brother last year, say they are afraid for their lives! To add to that the particular court is a “popcorn smelling” court, that most of the fanatic supporters don’t bother even going to attend games. Well, screw em all.

We were in Antira tournament in Sankt Pauli and it was the first year anniversary of the Gezi uprising in Turkey. so we had some chance to tell our comrades from all over the world, about it. we gave a speech about our fallen brothers during the protests, and spread the word. you can read the speech here: http://rebelultras.com/2014/06/07/tribute-to-the-martyrs-of-gezi/

Friends from Zielgruppe (Ultra’ Sankt Pauli) have made a banner for Berkin Elvan, another fallen brother just at the age of fifteen. They gave the banner to us, and wanted us to hand it to the family. Sowe did, and the family used the banner at the first year commemoration of Berkin, where he was shot by the fascist police.

Antira was a great experience, and we made lots of new friends and strengthened the previous friendships. 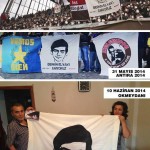 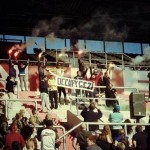 2014-06-18
RebelUltras
Share !
Previous: Rebel Ultras Guide to Boycotting the World Cup
Next: The No Racism Cup