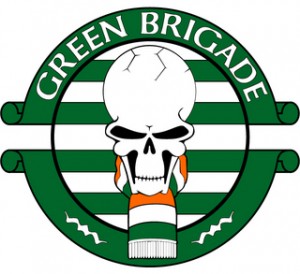 As the Green Brigade’s most testing season yet comes to a close, our makeshift section at this match would be our penultimate showing for the season.

With the league already won and our own issues still to be resolved with the club there would’ve been little to report from this match.

However, unfortunately the latest Celtic signing and popular goal scoring striker was making news for the wrong reasons off the field. Leigh Griffiths, who sadly has previous for making a racist remark on twitter some time ago, has been embroiled in controversy after being caught on camera with Hibs fans (he is lifelong Hibs fan) chanting that the former Hearts (Hibs’ rivals) player Rudi Skacel ‘is a fucking refugee’.

His behaviour caused obvious disgust and anger from sections of the Celtic support. However, sadly there was also and still remains sections of the support who are apathetic towards the issue. Unfortunately, it seems that so long as a player proves to be successful for Celtic on the park then a lot will accept them regardless of their behaviour. At the first Celtic match (away to Motherwell) after this story broke there was a clear split in the support, made worse by him inevitably scoring and arrogantly cupping his ear to the fans who criticised him.

With all this in mind, at the Inverness match we unveiled banners reading ‘A man must be a Celt on and off the field, otherwise he is of no value to this club’ – a quote from Celtic legend, Willie Maley. This was displayed alongside a raised banner of our ‘Refugees Welcome’ logo. The banners were clearly noticed by those they were aimed at with Griffiths, who had quickly become one to acknowledge the GB, staying well clear from our section which will no doubt continue going forward.

We now look forward to the final game of the season v Dundee Utd at Celtic Park on Sunday where we will see our team be presented with the league trophy; capping off a difficult season for us on a high note.

Previous End of the Season Next Season ends in Verona