End of the Season

Unfortunately, the season is over before expectations, in fact, the CGC has lost the crucial Game 3 of the playoffs championship for 5 to 3 against Bassano , dispelling the hypothesis of the derby with the Strong.

The game playing wasvery tight and balanced , in fact only in the final race of the Bassano has managed to establish itself as the Viareggio ended energies , and surrounded by a great atmosphere and a great cheer made by the boys of Gruppo Autonomo .

Also present were a small group of supporters of Bassano , who came with a car, among them there is one with a swastika tattooed on his neck, this has not gone unnoticed by the boys of the Group at the end of the game when most supporters had left and almost no one was left in the building the Bassano supporters car was intercepted.

They in turn, escorted by police fled when the ultras of Viareggio Antifa tried to stop the car in the middle of the street trying to make him pay for the atrocity that one of them wore on his neck.

With home defeat ended a long and intense year, the team gave everything they could , but unfortunately the lack of players has affected performance in the long run , as far as the group closes a season on the whole positive , a season in which we had faced hard times , but we are growing steady and we are always ready to support our team, our city, our colours and our ideology! 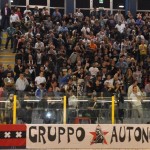