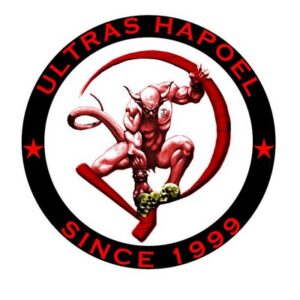 A great weekend came after a horrible season. the final derby of the season, was a derby to remember for life.

The hated racist, ultra nationalist maccabi tel aviv could win the championship if they won against us, in our home.Hapoel supporters and players would not let this happen, at al costs, and this is exactly what happened.The players did their part by winning 3-1, after leading 3-0 in one of the one-sided derby half times ever.

We did our part by setting out stand to fire with a pyro show and a big hand-made huge flag the pointed an uzi machine gun towards the yellow scum. they did a pathetic show in a game that could have been their championship game.it came down to this two times in the past – a team that came to celebrate its championship in our stadium – twice we drove them back and did not let them do it. this was the third time, and the biggest war of all – a derby.

This situation had never accrued before – a derby that can decide the championship, and now that it happened, Hapoel fought for its honour, we fought for hapoel’s honour and the red flag was victorious.

NO ONE CELEBRATES IN OUR HOME!In a few days we will have our annual labourers day party. this year with our own “leah katamin” that will perform live in front of hundreds of red. it sure will be a happy evening and we’ll try and keep you posted following the event.

Previous History of the Viareggio Tournament Next April Roundup