Last sunday Virtus played the homematch vs Alessandria in the stadium of Verona (where usually the two Serie A football teams of Verona play – Hellas Verona and Chievo Verona).

Virtus must play there because the stadium in Legnago (where the Virtus is housed this season seeing our stadium Gavagnin is not able for the 4th division).

We have boycotted this location and we stayed outside the stadium with our banners. Our protest against the town parliament who in an year did nothing for Virtus Vecomp Verona, just fucking false promises.

We also boycotted this particular stadium because for us it represent the house of Hellas Verona team that is following by a bunch of racist supporters and we dont want to share a stadium with this kind of “people”. We dont wanna have nothing to do with them.

In that stadium we will enter only the day the Virtus we will play there like guest team and not for an home game. We want our stadium Gavagnin-Nocini, we want back our history !!!! 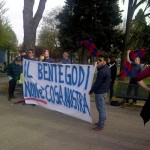 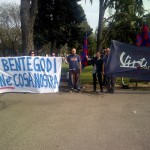