Match Reports: Against Znojmo a home match against Banik Ostrava and Liberec

The match against unattractive opponents (Znojmo) who have no real organised support is always difficult to muster the strength to attend. However we organised two busloads of travelling support in the away sector. But the game itself was not a very eventful one. We organised around 200 Ultras and and cheered quite well at times during the game but it ended in a fruitless 0-0 and nothing interesting happened with this game.

The game against Liberec we made a large Choreography : Faithful But angry that we have managed to prepare a flag for Kampa Showan for solidarity. In a match that once again seemed to be uneventful we organised good support and cheer and FINALLY Bohemians stopped the deadlock and managed to score a vital goal which eventually sealed the game! 1-0 for Bohemiansa! At last ! After half a year without a victory!

The match against Banik always brings with it big checks by authorities, ticket issues , etc. just to name a few.  Especially following issues which happened at the derby against Sparta were the media once again lied and distorted the whole situation! FUCK THE MEDIA!

We have prepared for the match one choreo for the City Hall! Because our hall once  again with its politics has been delaying the purchase of our stadium and these delays cannot be accepted by us any further. We then pulled out the inscription: Media and Association- lying, children crying, and police with tear gas!

In the second half pull we pulled out frame banners as the most anti-fascist Trojan Skinheads , ALF , GEGEN NAZI , FCK NZS , GNWP …. This event was with us a success and we are happy that we managed to exhibit these displays during a league match.  the game itself went well and the atmosphere was good although we avoided sparking off any further intricates with the authorites as such we refrained from lighting up pyro during this game. the whole game though went by really nicely with wonderful cheering and vibrant support by the Bohemian crowd. 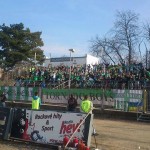 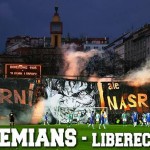 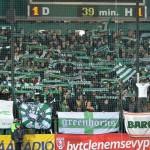 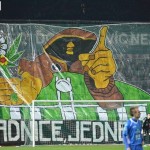 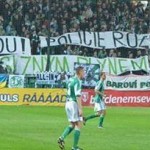 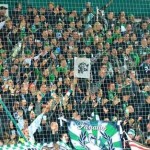 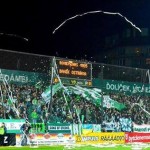 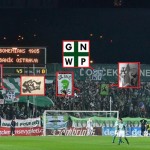 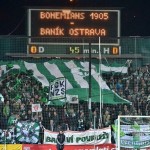