For those who don’t know, the play off system takes the six firsts teams of the first championship leg and their points gained are divided by two and a new small championship begins with these six teams. So now, the ranking is :

Pictures of the games are available on our website : http://www.ui96.net

We organised a pasta dinner on the 28th of February to gain benefit for ending the renovation of our local. Two old legend players of the club were present : Christian Piot (goalkeeper between 1966 and 1978) an Nicolas Dewalque (player between 1963 and 1976), thanks to them. Members of the Rebel Ultras team (as you saw in their trip report) where also present for a week in Standard and Den Boch and participated in the dinner and our away game in bruges!

On the 14th of March, all our thoughts went to our brother Chat Noir who left us two years ago, we miss you a lot bro. 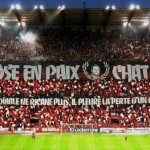 the tifo in memory of our brother two years ago

During our last meeting, we decided to give each month 5% of the benefit of our local to 4 charities.

On the 20th of March, a antifa demonstration was organised in Antwerp against the NSV. The NSV is a nationalist student group close to the Vlaams Belang (extreme right political party in the Flemish part of Belgium). Some of our members participated to the demonstration.

Stay tuned for more news over the coming days!