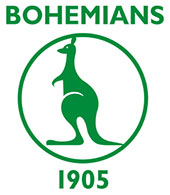 Bohemians 1905 are a Prague football club, which was originally founded in 1905 as AFK Vršovice. The club won the Czechoslovak First League only once, during the 1982-83 season. The colors of the club are green and white.There are a number of football clubs in Prague, the three biggest being Sparta, Slavia and Bohemians, so naturally the other two are our biggest rivals. The biggest rivalry is with Sparta Prague, which is the country’s most successful team and the most hated opponent. The most prestigious match is the derby with Slavia Prague called The “Vršovice Derby” . Both Slavia and Bohemians are located in the Vršovice district of Prague and their stadiums are separated by only 1 km.

The best known player from Bohemians’ history is Antonín Panenka, known for scoring the winning penalty kick of the 1976 European Championiship, Czechoslovakia vs. West Germany, with particular style and grace. Bohemians’ mascot is a kangaroo, the legacy of a 1927 tour of Australia, when the club brought back an actual live kangaroo to Prague.

Years 1973 and 1995 are the most successful era for the club, as the club remained in the top flight in those years. What’s more, during the 1982–83 season the club won the Czechoslovakian League Championship and advanced to the semifinals of the UEFA Cup. In the year 2005 it survived bankruptcy, which was a consequence of miss-management. The club was not allowed to compete in the spring part of the 2004–2005 Czech 2. Liga and its results were expunged. The club was relegated to the 3rd Czech division due to its financial insolvency, but later was saved by its fans, who started a trust fund and paid off portion of the club’s debts. The club was able to advance back to the top flight in 2007, where they stayed until relegation in 2012. After only one season in the 2nd league Bohemians returned to the premier league in 2013.

2014-03-02
RebelUltras
Share !
Previous: Rebel Ultras On Tour!
Next: News blast, Czech Rep.
Powered by Unity & Solidarity | Designed by Creative Rebels
© Copyright 2016, All Rights Reserved
Do NOT follow this link or you will be banned from the site!