Even though the club, like many other Dutch clubs does not align itself (yet) with specific political views, it is a club that strongly lies against racism and racist oriented attacks. The club and supporters have in the recent past acted consistently against acts of racism from wherever they have originated, whether externally or even from within some ‘supporters’ of the club itself. M-Side does not align itself with racist acts and is working consistently and proactively to foster and strengthen anti-racist views and stance throughout its group and the club culture.

Witness to this is FCDB supporters’ brotherhood with the Standard Liege Hellside since the late 1980’s. One of the oldest and strongest brotherhoods in Europe which still, until this day, has fostered an unbreakable bond between both groups. It was through the existence of the Hellside that the Ultras Inferno surfaced in the mid-nineties which are well positioned as a very strong and active Antifa/Antira Group.

Recently, in a solid exhibition of it’s determined Antira stance, FCDB proceeded in donating an official club kit to every person in a village in Tanzania. 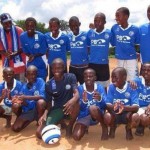